ANALYSIS The mineral coltan is one of the coveted products that is both the attraction and the misfortune of the DR Congo. Rather than boosting the Congolese economy and improving living conditions of the populations, it is largely controlled by various armed groups and causes insecurity and perpetuation of illegal economic circuits at the provincial, regional and international levels.

A sought-after product, a globalized sector

The world’s coltan resources are distributed in several countries, particularly Australia, Brazil, China, Canada, Spain and the DR Congo. While Australia would officially produce three quarters of the world’s coltan, this figure is put into perspective by experts who point to the great reserves of the Congolese subsoil. The DR Congo would in fact host between 60% and 80% of known world reserves. Other African countries, Nigeria, Ethiopia, Tanzania, Ivory Coast, or Benin, also have coltan in their basements.

Coltan is a mineral from which niobium (formerly known as colombium) and tantalum are extracted, which is the purpose of coltan. Because of its resistance to heat and corrosion, tantalum extracted from coltan is sought after in the manufacture of electronic components such as capacitors for computers and mobile phones. The electronics industry is estimated to monopolize up to 80% of the tantalum market. Its use is also found in missiles, rockets and even airplanes and in the composition of cobalt and nickel alloys in aeronautics and in the manufacture of reactors.

The Congolese mining crafts, which produce coltan, are part of a globalized sector that is concentrated in the hands of a small number of industrial actors.

Rwanda, the hub – but DRC is the source

For three decades, coltan has been at the heart of a particularly brutal war in DR Congo. A 2001 UN experts report accuses armed groups and neighbouring countries Uganda, Rwanda and Burundi of illegally extracting and smuggling this mineral from the Kivu region. The money drawn from this trafficking, according to the same report, was used to finance and prolong the war, in particular through the supply of weapons, but also to line the pockets of each other.

Specifically, the Rwandan army withdrew US $ 250 million between 1998 and 2000 from illegal coltan trafficking. Then, between 2013 and 2014 Rwanda became the world’s leading exporter of coltan. This country exported in 2013, 2,466,025 kgs of tantalum, or 28% of world production, according to data from the Rwandan National Bank (BNR), recording 226.2 million US in mining revenues, 134.5 million coming only coltan.

Rwanda’s status as a coltan-exporting country is constantly denounced by international human rights organizations, openly accusing it of continuing the illicit trafficking of coltan in the Kivu region, enriching itself at the expense of the DR Congo, while it does not produce much coltan itself.

Internationally, several foreign companies operating in computers, aeronautics and electronics prefer to remain silent about the “dubious” provenance of Tantalum used in various devices. Better, the term blood ore in reference to this war, has been used several times to designate coltan bought by foreign companies. Among the companies often indexed are: Apple, Bayer, Motorola, Sony, LG, Samsung, Nokia or Intel.

Reports from Global Witness, Human Rights Watch, United Nations Panel of Experts, Rights and Accountability in Development (RAID) and others demonstrate how these companies are exclusively driven by profit generated by the illicit trade and exploitation of coltan in eastern DR Congo.

Since 2012, the DR Congo has launched traceability projects to ensure that minerals do not come from conflict zones, within the framework of the International Conference on the Great Lakes Region (ICGLR). Eleven (11) African countries have thus agreed to ban the illegal exploitation of minerals from their subsoil. At the origin of this resolution, an American law called “Dodd-Frank” and adopted in 2012 on the initiative of the American president of the time, Barack Obama, obliging listed companies to specify the origin and content of mining products that they import. In March 2017, the European Parliament passed a similar law.

In 2017, Donald Trump dismantled the “Dodd-Frank” law but in 2021, Joe Biden took action to reinforce the act. Biden has been more attentive to the claims of African countries, even if in the medium term, the illicit traffic in minerals will not be completely eradicated.

The exploitation of coltan allows the populations involved directly or indirectly in the sector to survive, while the paramilitary militias, collecting their war taxes, can obtain arms and ammunition. According to some United Nations reports, these armed groups rely on an insured mining rent of more or less twenty (20) million US dollars per month.

The main beneficiaries of the exploitation and illicit trafficking of coltan are local traffickers, sponsors of militias and armed groups as well as international companies. Although these multinationals often operate through intermediaries, most of them are cited by the report of UN experts in the plundering of natural resources in DR Congo. This report, published on October 24, 2002, denounces that despite the withdrawal of foreign armies from DR Congo, the plundering of the country’s natural resources by criminal groups continues.

Attracted by the lure of easy money or sometimes kidnapped on the way to school, young people and children are forced to go and work in these artisanal mines, like slaves, without precaution of security. Extraction of coltan thus pushes young people to drop out of school, with the direct consequence of wasting school in areas of exploitation and often loss of human life.

Because access to formal employment is rare and poverty widespread, families rely on their offspring to survive. About 40% of artisanal mining workers are children.

At large, coltan is more harmful than beneficial for the DCR

A major negative effect of coltan is of course the fighting caused by the militias and military groups who aim for control of the minerals. Furthermore, the harmful effects on human health is extensive and the effects on the local ecosystem is negative. Water is the main resource used in mineral cleaning and in sites of coltan exploitation, the populations find themselves without water or consume unsuitable river water.

Injection of US dollar bills into the local market raised consumer prices and reduced the purchasing power of local populations. This inflation affects food products and pushes many villagers to abandon their agricultural activities to join the mining rush and collaborate with their tormentors for lack of alternative.

Now the army is in command in the region

In an attempt to control militias in the region where coltan is extracted, President Félix Tshisekedi has declared a “state of siege” and placed the army and the police in command of the provinces of Ituri and North Kivu. Since early May 2021, and for an initial period of 30 days, the civil authorities of these two provinces have been replaced by soldiers and police. Provincial governments, provincial assemblies, heads of local entities and civil courts are suspended and the military is endowed with exceptional powers. They can ban popular gatherings or even prevent the presence of people they deem harmful to their action.

It is doubtful if this is an appropriate response to the problems. The Congolese government might rather need to develop a comprehensive strategy, which is more than a military one, based on a detailed analysis of the causes of insecurity and the role of armed groups, to find relevant solutions to current violence and perpetuation of illegal economic circuits.

Facts regarding stages of the tantalum chain

Upstream, the production of artisanal mining has been “informal” since the end of the 1990s, following the liquidation in 1996 of the main mining group in the region, the Kivu Mining and Industrial Company (SOMINKI) with Belgian capital, which controlled and bought the artisanal productions. This artisanal mining now supplies a market dominated by the Australian mining group Sons of Gwalia (SoG), which contributes around 50 to 60% of global tantalum mining production.

The collection of coltan by purchasing counters and the transport takes place on foot, in trucks and by planes to Goma. These comptoirs operate under the control of a purchasing monopoly granted to the Great Lakes Mining Company (SOMIGL) 80% owned by Africom (Belgium), Promeco (Rwanda), Cogecom (South Africa);

There is a network of international air carriers (Brussels, Swiss Air), whose departure point is: Kigali (Rwanda) and Entebe (Uganda);

Among the brokerage agencies are Sogem and A&M Metals.

The most important industrial transformers for manufacture of tantalum powder are Cabot (USA) and Starck (Germany), covering 80% of the market;

Manufacturers of capacitors are mainly American: Kemet, Vishay and AVX. 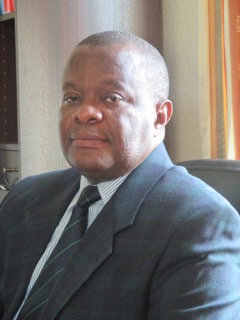 Joseph R. Kafuka
Born in Bukavu in February 1954, graduated from the Faculty Institute of Information and Communication Sciences in Kinshasa, Joseph Kafuka studied communication techniques at the University of South Carolina, in Columbia (USA).