Refugees across the globe are fleeing from wars or climate disasters they have not caused. Some of them are crossing borders of the European Union. What right do we, who by chance have been born in safe spaces, to treat some of them as fellow human beings – but literally leave others out in the cold? Here, a tale from Poland.

In August 2021 the US forces left Afghanistan in what was one of the most mismanaged and erratic Western foreign policy U-turns in recent memory. Around the same time, a large number of cheap charter flights were made available from several Middle-East destinations to Minsk, Belarus. Thousands of migrants from Syria, Afghanistan, Jordan and Iraq reached the city in the hope of organizing a relatively safe trip to Europe via the Belarusian-Polish border. The Western mainstream media was unanimous in naming the culprit for the sudden surge of migration via Minsk. Migrants were “being cynically used as weapons” by Alyaksandr Lukashenka to launch his “hybrid war” against the European Union, that seemed to be the consensus of the Western commentators across the political spectrum. What followed was a carefully orchestrated nightmare of media panic, illegal push-backs and people freezing to death in the Polish forests.

While the ‘hybrid war’ ‘illegal crossings’ might be adequate terms in geopolitics, in situ, in the primeval Polish forest, they become abstract. The reality is concrete: entire families, parents, children, pets and belongings were stranded in the forest for months.

The refugees at the Belarusian- Polish border

The first images of refugees stuck in the woods came from Usnarz, a Belarusian-Polish border crossing, and circulated the media in late August 2021. The Polish national television covered the event in a tone of apocalyptic hysteria: the country is under attack. Of all the footage from the border crossing in Usnarz one image stayed with me: a teenage girl waring a hoodie, holding a spectacularly beautiful, pedigree cat. “They can’t be real refugees if they’re travelling with a cat, anyone can see that” commented one of the so-called experts interviewed by the state TV.  I remember watching the news with my bedridden, octogenarian grandmother, who was as baffled as I was. “If war comes to your door and you don’t take your cat with you, what kind of person are you, really?”

Dedicated volunteers helping – but no Red Cross, no big charities

Back in September 2021, as images of refugees stranded at the border hit the news, a man called Witek immediately felt he wanted to get involved. His tale is calm, detailed, and touchingly self-effacing. “I went on my first trip into the woods not knowing what to expect. We were carrying water, food and medicines to the nearest Google ‘pin’ for one of the many refugee groups.”  Witek didn’t quite realize this one-off effort would become a career choice. “It soon became clear that there were not enough people to work directly in the woods. It takes stamina. Apart from a couple of MPs no one was there – no Red Cross, no big charities. We were working alone, literally a group of crazy activists who left everything behind.” They had to rely on grassroots organization and almost immediately go underground, as the authorities became increasingly keen on blocking any ‘unauthorized’ aid, even the distribution of food was made difficult.

The paradox of solidarity and loneliness

What strikes me in Witek’s story is the paradox of solidarity and the absolute loneliness of the job. On one hand the grassroots movement proved to be strong, resilient, courageous and incredibly resourceful. On the other hand, their work was soon to be banned by the state authorities and they started using encoded communication channels and hiding from friends. The kind of service that should receive full state backing was semi-criminalised as the authorities introduced a partial state of emergency. “We were very aware that people were going to start to die there. ”

Rut Kurkiewicz, a journalist of a left-wing online magazine Strajk, calls people like Witek ‘heroes of today’. She says: “Grupa Granica [the network of NGOs helping refugees] is currently the largest grassroots organization of humanitarian help in Europe. They are saving lives every day, for months on end. They’re risking very real consequences. I want my children to learn about people like them in their history books. This is what heroism looks like.” Kurkiewicz has been covering the Belarusian border crisis for nearly a year now and in some cases followed her protagonists all the way to the temporary facilities where the refugees are awaiting administrative decisions. She is enraged by the conditions her protagonists find themselves in: effectively imprisoned guarded facilities for months, with inadequate food provision, no access to education, often with no access to translators on site. Witek, who also stayed in touch with the people he’d helped, confirms her story.

People held in facilities without chairs to sit on

“In the facilities we monitored, there were regular strikes. Interestingly, the guards themselves were often visibly embarrassed by it all. Once I went in to meet a group of refugees we’d assisted before. The group was amazing – a poet, a philosopher and a historian, all imprisoned in this dirty old room with no chairs to sit on. Actually, the workers in those facilities were also put in a very strange position: they suddenly became prison guards. They are not coping, either. It’s a nightmare.”

The millions of Ukrainians facing Russian brutality – a different story

Half a year after the events of Usnarz, in February 2022, Vladimir Putin started his deadly war with our other eastern neighbor, Ukraine. The brutality of the attack immediately sent shockwaves through Poland, a country with centuries-old experience of Russian imperial violence in its many forms: partitions, occupation, political control, unwanted military presence. Eastern-Europeans just intuitively get it: the Russian threat is to be taken seriously.  Within a couple of days, life in Warsaw was completely transformed. My work colleagues started organizing and driving to the border after hours to pick up strangers. My otherwise non-activist family, neigbors and friends were organizing collections of food, medicines, money, clothing, weapons even. The Warsaw Central Station, Dworzec Centralny, became a hub of grassroots humanitarian help manned and coordinated by – wait for it – some of the biggest Polish influencers. Instagram starts of between 500 thousand to over 2 million followers organized the humanitarian village at Centralny, usually with no prior experience whatsoever.

An estimated two million Ukrainian refugees entered and chose to remain in Poland. In all major cities, spontaneous movements emerged and organised what was probably the largest operation of house-sharing in Polish history. The government made all kinds of emergency aid decisions: housing was made available in abandoned social centra, extra rooms vacated in care homes. There were Facebook groups you could join to offer a spare room, a mattress, a duvet. Empty flats were sub-let at a heavily reduced price. Actors announced on the radio how many Ukrainian refugees they’d welcomed in their homes. The scale of this effort was, in the truest sense of the word, universal. My high school friend randomly called me after fifteen years of silence: “If you have anyone who needs a room in Poznań or Cracow, call me, I’ll put you in touch with such-and-such”. For a moment there, I could suddenly make sense of my parents’ stories of the First Solidarity, the events of 1980, when a taxi driver would not take money from you if you were coming back from a demo, when ten million people joined a trade union and created a network of mutual aid on a scale that would make Kropotkin blush.

The double standards are painful

And yet, it stung. It hurt, almost. The intensity of that time, tragic yet faced with dignity and solidarity, was bittersweet. While all the media teams were on the Ukrainian border, the quiet drama of people freezing to death just a hundred kilometers north continued.  And it will continue, since despite all the horrors of the border crossing, a new wall being erected by the Polish authorities and the blistering cold of the winter, the Eastern-European route remains the safest migration route to the EU.

There are two migration policies with two entirely separate legal and moral realities. One is based on the Geneva Convention, wartime solidarity and sharing resources. The other is tinted by a border defined as the enemy line. There, people will continue freezing in the forest, because their suffering is not recognized as legitimate. The European Union, once more, created a politically immature strategy of migration control which is already proving not only ineffective, but morally indefensible. 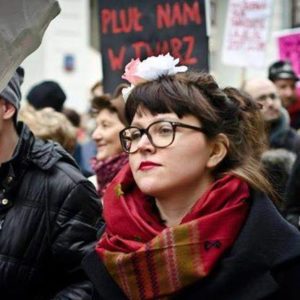