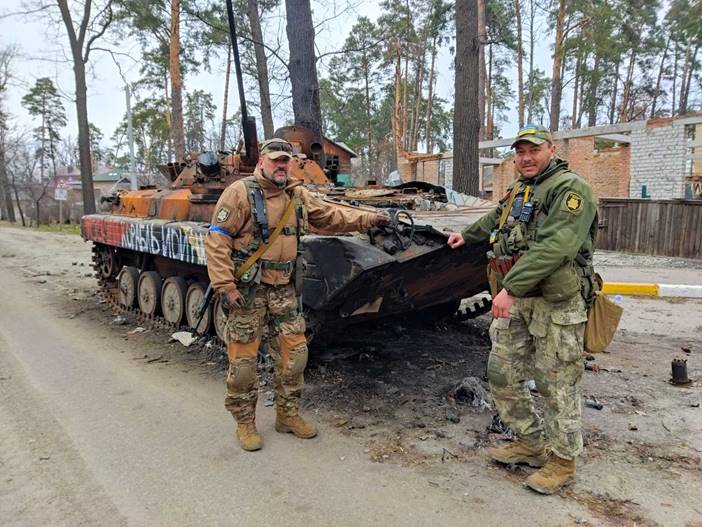 ANALYSIS This is the second part of a unique text from Bucha where a Ukrainian fighter tells his story which provides an illustration on how voluntary fighters are strengthening the overall defense structure of Ukraine.[1]Part 1 published 2022-05-26: … Continue reading This helps explain the considerable achievements in keeping the Russians at bay since the invasion.

Interviewer So far, you’ve only talked about the “Bucha Guard”. You haven’t mentioned how your life was when there was still peace. How did this new life begin for you?

YB (alias): Maidan. I have been on Maidan since December 1, 2013. Institutskaya, Hrushevskoho[2]Street names in downtown Kyiv where some of the most tragic and bloody battles have taken place during Maidan.… I went through those events. Then came the annexation of Crimea, the aggression in Eastern Ukraine…the list goes on.

Interviewer: In that case, you must have been somewhat prepared for the events of this year…have you been waiting for a Russian attack in the months since the situation became tense?

YB: I have known since 2014 that there would be a full-scale attack and, for me, it was only a matter of time. There was no doubt. If someone thought that this was a local conflict, that it concerned only the East of Ukraine, then they would be mistaken. I always understood that this conflict with Russia would not be limited to the Eastern regions.

“We were ready! Our backpacks were prepared, but we had no weapons”

Interviewer: Please tell me about the beginning of the war. How did it all start for you?

YB: On the morning of February 24, our chief of staff raised the alarm. We went to Gostomel airport. We went without weapons because we didn’t have any. We could only observe the arrival of the first landing party, contact the Armed Forces, and try to coordinate our actions, but at that time the Armed forces were not ready to provide us with directives. On the 25th, we received weapons at the Irpin vyiskomat[3]Military registration and enlistment office., handed them over to the members of our organization and to my friends from the Zhytomyr and Vinnytsia regions.

As early as the 25th, we had organized patrols around the city. We had partly destroyed, and partly dispersed, the enemy’s counter-espionage group. And so, the war began…on the 26th, a joint detachment of the Armed Forces of Ukraine, which was leaving Gostomel airport, was attacked and defeated by Russian Sushka[4]Attack aircraft in service within the Russian Air Force. attack aircraft. We arrived on the scene, drove the killed to the morge and the wounded to the hospital, and received portable Igla AMSs. On the same day, we found a person who knew how to use them — an AMS operator. On the 27th, we loaded ourselves into our transport to go on the routes that the Russian helicopters had used to fly to the airport. We planned to shoot down the KA-52-helicopters or perhaps some MIs[5]Produers of attack helicopters used within the Russian Air Force but, in the morning, we received information that a large convoy of Russian armed vehicles was approaching Bucha. We changed the plan, deciding instead to arrange a meeting within in the city. We determined our required positions for the situation in advance, so the next step was to distribute our people accordingly.

We were 20 fighters when we attacked the Russian convoy

YB: Those who did not have weapons helped with the grenade launchers. So, we managed to settle down by Novus[6]The market mall in Bucha. and waited. When we saw the column, we rejoiced as it came in. They ignored all of the rules, almost as if it were a parade[7]The column was poorly organized and did not comply with the rules of military affairs. Some of those sitting in armor sang. We opened fire on them. They fell to the ground, mostly dead. The fire was on the right side of the column. Grenade launchers were located both behind the mall and behind the monument to the soldiers who died in Afghanistan, the latter of which consists of an armored vehicle on a pedestal. Then came the media coverage about the Russians, about the destruction of a Soviet-era monument. Of course, they are idiots, but this time the monuments posed a real threat to them — it was the location of a grenade launcher, and so they tried to destroy it. This was a rare case in which their actions held a certain logic.

YB: Then the convoy stopped to regroup. When the 14.7 mm machine guns and 30 mm automatic guns started shooting, we were forced to leave. We are locals, so we left quickly but calmly because we knew where to go and how to get there. We immediately contacted the Armed Forces and indicated the location of the stopped column, as they could no longer relocate quickly. The aircraft went to work on this column, after which the latter wasted no time in getting moving again. Although they did not go anywhere at this point, their intention was clear: to move to Irpin and then on to Kyiv.

We had losses, such av Volodya

During this battle, we lost Volodya K, and four others were wounded. Volodya was a veteran of the anti-terrorist operation in 2015. He lost both of his legs when a mine exploded. Among the four wounded, one was seriously injured. The former colonel of the Armed Forces received three bullet wounds and remained on the battlefield. He was not killed by Kadyrov soldiers because they were convinced that he was already dead. He remained in a hospital in Bucha but ultimately survived the occupation. He was saved by his age: he said that he was retired, had gone out for bread, and had gotten into a random queue. He was then taken away as a caravan of cars left with buses evacuating women and children.

My fighters found a flash-drive for me among the burned vehicles. It contained information about the personnel within the column, everything from personal data to mobile phones. Of course, they did not answer our calls because they saw that we had used Ukrainian numbers, although we did send them text messages. In general, the command of the Ukrainian Armed Forces did not plan to provode Bucha with troops. It was considered a gray zone,[8]“Gray zone” used in the military means “territory, which is not under control of no one from the confronting armies” and our help came as an unexpected and much-appreciated gift. We did everything we could, but our help came at the cost of further casualties. Of course, it is impossible to win without losses. Unfortunately, that is the nature of war. We, however, did not start this one. It is a pity that the time bought by our actions was not used to carry out a large-scale evacuation…but that is not our responsibility. We did all we could: we stopped the column, and we guided the ambush conducted by the Armed Forces aircraft. For a small guerrilla group, we did everything we could. Unfortunately, we did so at the cost of the lives of our compatriots.

We had no time to think about death

Interviewer: Is it possible to get used to the idea that any given day may be the last?

YB: There was no time for such thoughts. We didn’t even have time to think about the immediate future. There is no time to think here. This is my city; I will defend it no matter what. On the 26th, we planned to blow up the bridge — the one they passed over when they ran into us in Bucha. We drove with 40 kg of TNT…however, it turned out that the bridge’s architecture was such that we could not have safely blown it up with 400 kg. We asked the artillery unit to open fire on the bridge, but they didn’t have time. Nonetheless, we did our part well, and then Bayraktar[9]Unmanned strike aircraft “Bayraktar” which is in service of the Ukrainian army finished where we left off.

Interviewer: When, in your opinion, will there be victory for Ukraine?

YB: Once we make it to Russian territory, and the commanders tell us, “Okay, that’s enough. This is where we can stop and still be certain that our borders are safe”. In other words, they (the Russians) wanted to bring about demilitarization, but we will be the ones to carry it out. But it will be in their territory instead. The Russians should not worry themselves with stupid tales about goals in Ukraine, but rather about how far into their territory we are prepared to go to feel confident that our borders are no longer threatened. If it proves necessary we  will go to the Red Square to achieve this purpose, then so be it. By the way, I am generally a non-drinker, but I already have permission from the commander to drink some good whiskey on the Red Square. But only there! This is how our victory should and will happen.

Interviewer: And how do you see the future? What will happen after the victory?

YB: The Bucha guard, I think, will not go anywhere. However, it is possible that the objectives will change. Previously, the main focus was on the military and law enforcement. We are ready to continue to help the army, the law enforcement agencies, and beyond — even if it is necessary to do so during peacetime. Nonetheless, there is another important social direction to consider: we have to take care of the widows and the families of the dead. We have many social functions. Maybe we can help to rebuild what was destroyed by the war, all the while ensuring that we do not lose our sense of unity. It is too precious a thing to lose.

Recalling the past years, the most precious thing we have gained, we have gained at great cost: our unity, trust, and confidence in each other. I could not have imagined in 2013 that three completely different people — myself, a small-scale entrepreneur; a priest (now a chaplain in the Ukrainian Armed Forces); and a retiree of almost 60 years — would survive and overcome so many challenges together while also remaining close friends and like-minded, reliable partners. Our bond will endure even after the victory! 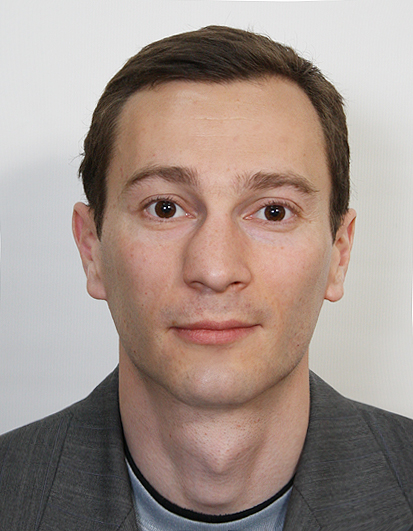 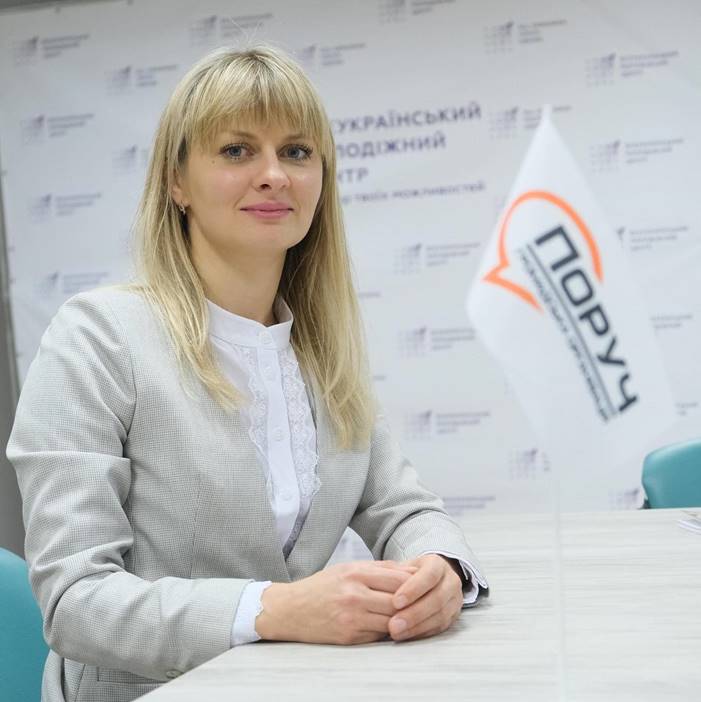 Denys Verba, Born in the Ukraine, PhD in economics, associated professor in Kyiv National Economic University named after Vadym Getman, leader of researcher group in NGO “Poruch” in field of estimate the social outcomes of programs and politics