Jesus and the Rainbow Flag

ANALYSIS In Poland, like in many other countries, the far-right claims monopoly in interpreting God’s will, and appear particularly interested in matters related to sex, and in accusing LGBT-persons for pedophilia. Margot, a Christian and non-binary activist has, supported by other activists, stood up against the accusations and police brutality – and gained support from high-ranking members of the Church.

The far right on the streets harassing LGBT-persons

Warsaw residents kept reporting the van to the police for months, but to no avail. After several months Margot, a non-binary activist and a founder of the collective Stop Bzdurom (literally: Stop the nonsense) decided to stop the van by force. Together the activists Stop Bzdurom tore down the banners and got into a row with the driver. A video of the event circulated on the internet, to the quiet satisfaction of people like me, furious with the prolonged police inaction.

“For me, there is before and after August the seventh” – writes one queer blogger, and there are good reasons to believe that many people, within the movement aa well as many others, share the feeling.

On August 7, the activist Margot was expected to be arrested for the attack on the van.  Thatevening a group of activists organized a peaceful sit-in right in front of Warsaw University in solidarity. The activists put a rainbow flag on the iconic Warsaw-monument of Jesus the Saviour, right across main entrance of the Warsaw University, and blocked off the street. After several hours, the police came and almost outnumbered the protesters, who refused to leave the scene. Eventually the police started to physically remove the protesters by beating, kicking, and handcuffing young people. Staggering brutality continued even as several MPs came to the scene and the police carried out mass arrests.

The next morning, shocking videos and images of the violence on night of the 7th of August startedto circulate on social media. Police officers kicking helpless teenagers, the MP Magda Biejat physically blocking the police van with the arrested protesters in the middle of the night, and MP Agnieszka Dziemianowicz-Bąk putting together a legal team to make the police  release information concerning the whereabouts of the imprisoned activists.

Meanwhile, the mayor of Warsaw, number two in the largest opposition party, Platforma Obywatelska, announced that “his hands were tied”, as he was on his annual family holiday, clearly unwilling to act.

Shortly after Margot’s arrest, the association Otwarta Rzeczpospolita published an open letter demanding her release. There would be nothing unusual about it, if it had not been signed by some of the most iconic Polish Catholic public intellectuals; Halina Bortnowska and Rev. Adam Boniecki, two editors-in-chief of the two key Polish catholic magazines, and one of them professor of Law at the John-Paul II Catholic University in Lublin.

Thus, Catholic intellectuals– many of them in their late 80s – stood firmly on the side of the non-binary, anarchist Queer activist

While the high-profil Catholics stood up for Margot, most of the mainstream liberal media commentators joined the chorus of the right, accusing Stop Bzdurom of ‘causing unrest’, ‘disregarding private property’ and blaming Margot for ‘posing a threat to the rest of the LGBT community’ (the irony!).

Margot openly refuses to align herself with any of the existing political sides and refused to follow party lines or journalistic coteries. She does not ask for recognition from beyond the movement. Instead she simply reasserts herself as a Christian, non-binary activist, as someone whose loyalty lies only within – not outside – the movement.

In one interview she said: “If the liberals do not want to accept us as we are, let them join the right. Our goal is not to negotiate minimum living conditions with the right, it would be a waste of time. We need to take care of our own community now”.

To whom does Jesus belong?

Margot’s calm determination seemed almost surreal. When asked in a radio interview about the ‘offensive performance’ of putting the rainbow flag on the statue of Jesus, she responded: “Let me explain again. Jesus Christ belongs to me, too. I am also a Christian, I’m not the kind of person who takes religion lightly. The New Testament is an important book for me. This wave of indignation we’re seeing has nothing to do with religious feelings, it comes from the internalised hatred towards LGBT people”.

All of what is happening must be seen in the context of the Catholic Church interest in – or obsession with – sex. Not long ago, during a sermon at the historic castle Wawel, the bishop of Cracow warned against the ‘sexualization of toddlers, who pray to the God of sex’. If anyone else had made such remarks during a state occasion, let alone during Holy Mass, they would without doubt have faced criminal charges for public offence.

Today, only a minority of Poles trust the Institution of the Church

According to a 2020 poll, a mere 39% of the Polish public declares ‘trust’ in the institution of the Church. The ultra-aggressive rhetoric of the top officials of the church is clearly not paying off and society is increasingly drifting towards secularist attitudes.

What Margot is doing for Polish public debate is revolutionary.

Even as she consciously navigates out of any kind of fixed alliance and refuses to be perceived as a leader of the LGBT+ movement, she has already managed to recenter the argument. In a country where no public event is complete without the Holy Mass, the Catholic Church is losing its monopoly overthereligious vocabulary. The people gathered in LGBT+ rallies hold banners stating that ‘Jesus would be standing here with me’, ‘the rainbow doesn’t offend’. Today, when various minoritiesare facing and challenging institutional and legal discrimination, the language of religion is being reclaimed as emancipatory.

Some people are terrified by the cultural war which goes on. There are professors, commentators and opinion leaders who argue that Poland needs debate, cool-headedness and a massive step back from ‘uncompromising’ activism. “Where is this going to end?” “Is it really necessary to use the statue of Jesus?”

Ten years ago, I thought that any active attack, any re-negotiation of religious norms through street activism would lead to nothing but an increased alienation and fear on the other side. I thought that each side should accept some minimum level of liberal decorum and respect.

But I have changed my mind, given the fact that an illiberal party won the elections twice in a row and organized the most vicious campaign against the LGBT in the country’s history, and  now we have to listen to aggressive fantasies about masturbation-classes for children.

We are reading court rulings which allow pro-life vans to park in hospital courtyards, we are looking after friends arrested for peaceful sit-ins, and we are seeing pictures of swollen faces of gay and lesbian activists beaten up on their way home. Thus, I finally recognize we have been wrong all along. The culture war has been going for a very long time, and now it’s finally time to listen to those who have been hit the hardest and learn a thing or two about strategy. 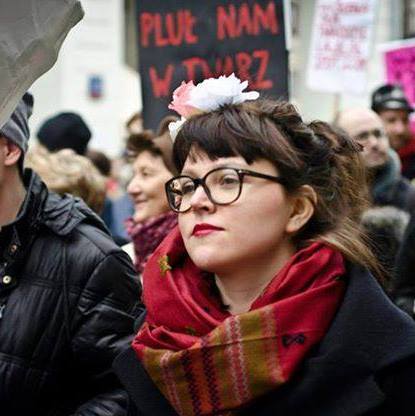