REFLEKTION This text on religion, faith and politics consists of two parts. The first addressed the use of religion in current times when core values of what has built societies and multilateral cooperation are being challenged and brutal force too often is mixed up with power. This second part of the text looks at religion as a double-edged sword, of force and power, which can be both helpful and detrimental in peace-building and in dealing with human rights.

Too often we have seen actors in Europe and elsewhere rush to engage with religions as the peace makers par excellence – often without learning from the glaring lessons of history. After all, apartheid was religiously sanctioned by some creditable religious institutions. As was Fascism. As is the ugly hydra of non-state violence and severe state repression, in other parts of the world.

The Central African Republic is an example of the ‘double-edged sword’ of religious involvement in conflict resolution. Many religious entities – whether religious institutions or faith-inspired NGOs – are often the first recourse for victims of the conflict. And yet when the conflict escalates, the very identity of a religious entity becomes its liability. Appreciating the double-edged sword of religions in this case, in fact, requires a deeper understanding of political-military nuances.

As experience in the same country illustrates, Faith Based Organsations (FBOs) are critical deliverers of services to the poor, with some religious organizations claiming they provide an average of 40% of healthcare. In fact, in other countries across sub Saharan Africa, because they are deeply rooted and well managed, some FBOs work in tandem with government, and successfully engage in public-private partnerships. Their experience also translates into an unparalleled database and knowledge capacities, identifying what people need, how best to serve some of the most marginalized, and how to support governments to serve the most vulnerable.

So we need to re-evaluate the way religions are understood, and the means with which secular domains seek to engage with the ostensibly sacred ones. This is especially relevant within the context of current geopolitical dynamics of power, including sustainable development and its indivisible component – peace-building [1].

While some religious peace-makers can and do contribute to achieving the SDGs and facilitating the changes required, not all religious leaders and actors are well placed, nor indeed able to do so. In fact, there is no evidence to justify asserting that religious actors are better placed, on their own, to understand local contexts, or even to occupy the moral high ground, and enjoy the trust of civil servants  – in spite of this being oft said.

To successfully collaborate with religious actors, a careful analysis of their respective profiles and track records are mandatory. Because religions can be the tool of the righteous, but not necessarily always the right – as unfolding political events even in supposedly ‘peaceful’ contexts continue to demonstrate.

All religions – institutions and actors – have multiple dimensions, so it is imperative that we ensure religious beliefs and praxis are fully in alignment with human rights principles and laws.

Disputes pertaining to human rights, especially women and girls’ rights, are often seen as somehow unrelated to the real business at hand, that of peace making.

Yet there is no question that we dare to challenge harmful practices – including gender-based ones and uphold all principles of human rights for all peoples at all times. Indeed, it is precisely because of these contested domains, the contested sensitive issues, that religions (covering faith, culture and values), have to be a critical part of our engagements on peace making.

Religions matter because they are part of a civic political social economic fabric. Not because they stand alone and outside.

Assuming that you can engage largely male religious leaders as peacemakers or peacebuilders, while turning a blind eye to the fact that some of them may be bigots, paedeophiles, homophobes, or plain hypocrites (in Hannah Arendt’s terms), is an act of force – because it will ultimately, polarize, repel, and weaken the efforts at hand.

Where and when religious partnerships is seen as a transactional feature in business as usual policy and praxis, or an element in the toolbox of peacemaking, or part of our foreign policy priority or developmental approach – we are failing to see religion as a human experience. Actually, ‘religions’ should not be subject to what we do with all the other tools at our disposal (monetary/financial, ideological, institutional).

To me, religions are, ultimately, a universe of human experiences of faith – therefore they are inherently intangible, unquantifiable and user-unfriendly.

If we fail to see that human experience, we are on the road to barbarism – and we are risking a consolidation of the vortex of force. Because we entitle “our” side in conflicts the “right”, in the name of God, to use violence.

Could it be possible, that to be agents of power, we might actually have to come to terms with the irony that in order to realize the peace-building power of religions, we might have to consider leaving religious considerations and partnerships out of the policymaking spheres altogether?

Is it conceivable therefore, that to be agents of the peace-building power of religions, we may need to “Render unto Caesar the things which are Caesar’s, and unto God the things that are God’s”…? Not because we the two domains of Caesar and God never shall meet, but rather because seeking to regulate all faiths into politics – or vice versa – will result in force.

I have learned that the power of humility is to recognize the limitations of both politics and religions. In concluding, I suggest that we try to be radical in our considerations, and to be radically inclusive; of all living and breathing beings and things, radically compassionate, and radically merciful.

If you think about it, being thus radical, how can we fail but to be powerful? 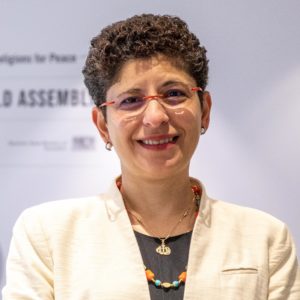 Part I of this series of articles can be found here.

[1]The Sustainable Development Goals, otherwise known as Agenda 2030, which was formulated and adopted to by 193 governments – UN Member States – in September 2015, covers all aspects of human rights as well as peace and security concerns. I deliberately uphold the perspective that within the 17 Sustainable Development Goals, all human and planetary interests pertinent to all peoples all over the world, are covered in terms of aspirations, objectives and indicators. Peace-making, therefore, is very much part and parcel of each of the SDGs.