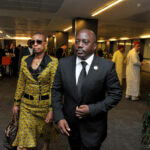 ANALYSIS Transfers of at least 138 million US dollars to the benefit of former Congolese president Kabila, family and allies were disclosed by an investigation, Congo Hold-up, conducted by the European Investigative Collaboration, 19 media and five NGOs. The investigation was based on leaks from a major bank in Central Africa, which played a key role in the … END_OF_DOCUMENT_TOKEN_TO_BE_REPLACED